At the end of 2020 I was browsing through cameras on a certain well known auction site when I came across a listing for a Mamiyaflex Junior. I was not familiar with this camera so I decided to have a look and I was instantly enamoured by it’s beautiful silver face and slightly art deco aesthetic. The camera looked to have seen slightly better days but a quick search online revealed that these cameras are actually quite rare. I was now suitably intrigued!

Made in Occupied Japan

Mamiya is a Japanese manufacturer founded in 1940 by Seiichi Mamiya and Tsunejior Sugawara and probably best know for their professional grade medium format cameras. The Mamiyaflex Junior was their first twin lens reflex camera and was released in 1948. It takes 6×6 images on 120 film and the lens is a Towa Koki Neocon f3.5. and shutter speed is from 1 to 1/200. The body is a die cast, all metal body in black enamel trim and black leather with metal trim. The right side of the camera features the film winding knob, brake button and exposure counter while the left has the contact for a flash attachment. Shutter cocking and release levers are on the front of the camera and you focus by turning the focusing rings.

One of the interesting features is the ‘Made in Occupied Japan’ written on the winding knob meaning the camera was manufactured during the allied occupation of Japan after World War Two. Japan was occupied by allied forces, led by the United states under General Douglas MacArthur, from 1945 to 1952. The occupation saw widespread military, political economic and social reforms. A new constitution took effect on the 3rd of May 1947 and saw the Emperor of Japan reduced to a symbol of the state with no military or political power. Japan was also forbidden to lead a war again or maintain an army and there was an attempt to dissolve Japan’s large industrial groups known as ‘Zaibatsu’. Under the new constitution women also gained much greater rights.

You can get a sense of the post-war period in Japan from photographic collections such as the Theodore Akimoto Family Collection which has been made available online by the Densho Digital Repository. Theodore Akimoto served with the 442nd Regimental Combat Team, Military Intelligence Service, 71st Signal Service Battalion, and Photo Division SCAP. The majority of the images document Theodore Akimoto’s time as a U.S. Army photographer during the occupation of Japan. While he did not take all of the photographs himself, they provide a fascinating insight into this post-war period and include some stark images such as the remains of Hiroshima.

I thought that it would be interesting to own a camera made during this period of history and so I decided to take a chance on it. When it arrived it looked like it had seen better days, and it smelled like it too. The first thing I did was remove it from its case and give it an extremely thorough clean. This included removing the front faceplate to clean any grime underneath and allow me to clean the lenses and the underneath of the focusing screen. Cotton swabs and microfibre cloths are your best friend when dealing with a particularly grimy camera. I use a tiny drop of water and dish soap on the cloth to clean the body down. The cotton swabs help get into the nooks and crannies around the faceplate and the gears on the lenses. This was a camera that was never going to come up looking brand new and nor would I expect it to. After a good clean it no longer held that musty odour and the lenses and focusing screen were in much better shape. It was now in a good enough condition to put a roll through it.

It was the end of December 2020/ early January 2021 when I loaded up the camera with a roll of Fomapan 400. Ireland was in the highest level of lockdown due to the Covid-19 pandemic and as a result we couldn’t travel more than 5km from our homes. Because of this I ended up testing out the camera around my home. The camera is very basic to use and functions like most TLR’s in regards to loading and unloading the film. It does not have a built in light meter so you could use an external meter or go by the Sunny 16 rule. The image is composed on the focusing screen which is actually pretty bright given the age of the camera. After each exposure you have to push the brake button on the right side of the camera and turn the winding knob clockwise to wind the film on.

I enjoyed the simplicity of this camera and was pleasantly surprised by the results. The initial scans showed that the images were a little underexposed so a slight increase on the exposure in Lightroom helped to bring the images out a little more. I actually really love the dark tones of the images which I think evoke the time of year they were taken in. There is a softness to the images and by no means are you going to get razor sharp photographs with this camera. But for me this doesn’t matter, the joy comes from taking a chance on a camera, giving it some TLC and seeing what it produces. In this instance it was a real pleasure to see that this TLR which was manufactured in a country coping with the aftermath of World War Two, can still produce beautiful images after all these years. 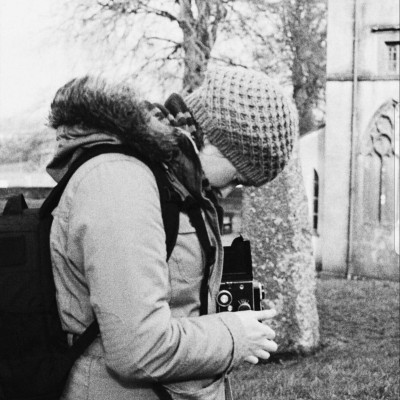